Start a Wiki
Will Knight is a character in Say Goodbye to America: Scatter
Will Knight 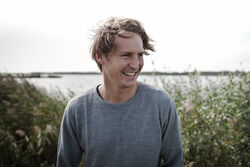 Nothing is known about Will's life before the outbreak

At some point, Will joined the Yard

Will is first seen in Spencer's trailer with Brooks, Nils and Marcellus when Lewis walks in asking about Maine Ryan's supposed death. He later rides with Nils, Izabel and Marcellus to Apex

Will is present during the attack on Apex. He was shot twice in the chest by an unknown gunman and Phillip James takes inside to see Elizabeth Hill, which Jack West is not happy about

Will Knight is still seen passed out in Elizabeth's office

Will is seen with Lewis trying to keep Nils alive.

Will is introduced to Aaron Meyer and Matt Graham. After an awkward encounter, Matt allows Will to sleep at his house

Will is seen in Matt's house sleeping in a vacant bed. Matt then asks him about the day of the attack and wonders if he killed Lindsay Meyerson, which he denies

Retrieved from "https://undeadfanstories.fandom.com/wiki/Will_Knight_(Scatter)?oldid=208811"
Community content is available under CC-BY-SA unless otherwise noted.