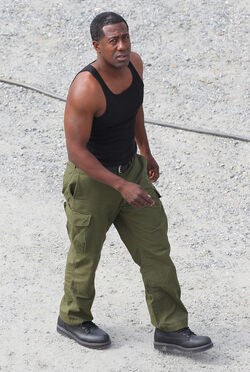 Nothing is known about Warren's life before the outbreak

At some point, Warren joined the Apex community and became a member of the construction crew

Warren first appears alongside Paul and Tim arguing with Ray about leaving for the Target to help Scott. Before leaving, Ray tells Warren to not come back for at least a week

Warren later appears having arrived at the Target late at night and see Dimitri, Leo, Otis, Phillip and Eric.

Warren is seen with Paul, Tim and Aaron making plans about fortifying the Target. He is present during the Massacre at the Target, during which he kills Maria and Kenzie alongside Lindsay and Ruben, before later killing Georgia and knocking Gavin Foxx out cold.

Warren is seen leaving with Scott, Doug, Paul and Sylvester. He is later seen telling Ray about Tim's death, where the former gives him a hug

Warren is seen at Jenny's door with Scott and Gavin talking about a possible job for Gavin. This is where he meets Sean Moreland

Warren is seen with Ruben and Scott bringing Sean and Gavin to the construction site to introduce them to everyone. He brings Gavin to Doug and Paul

Warren is seen with Sean and Gavin watching over the construction area. They discuss life in the Yard. After leaving to relieve himself, he is attacked and bitten by a swarm of walker. His arm is amputated by Gavin and he is carried back by Gavin and Cole to Elizabeth Hill's office. After being worked on for a while, he eventually dies. It is presumed he is put down by Elizabeth after she asks everyone to leave

Retrieved from "https://undeadfanstories.fandom.com/wiki/Warren_Smith_(SGTA)?oldid=207396"
Community content is available under CC-BY-SA unless otherwise noted.