Start a Wiki
Vass is a character in Say Goodbye to America: Scatter
Vass 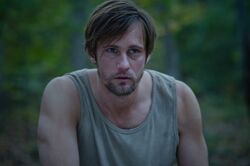 Nothing is known about Vass's life before the outbreak, except that he was incarcerated for unknown reasons

At some point, Vass joined the Yard as a member of the prison community

Although uncredited, Vass confirms he was at the Attack on Apex

Vass is seen with Grease, Amin and Ocean discussing Fig and his failing health. Vass reveals he saw his friend get shot by Otis. He and Ocean later leave to see Max

Vass is seen around the campfire arguing to stay at the Yard rather than leave. He votes to stay. He later leaves on a supply run with Rick, Brooks, Lottie, Grease, Max, Ryo Osaka and Adam McGill

Vass and Grease walk around the perimeter of the Lowe's while the rest search the area. Later, he asks Max if he found any dead inside

Retrieved from "https://undeadfanstories.fandom.com/wiki/Vass_(Scatter)?oldid=209337"
Community content is available under CC-BY-SA unless otherwise noted.