Start a Wiki
Troy is a character in Say Goodbye to America: Scatter
Troy 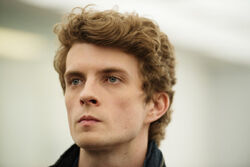 Nothing is known about Troy's life before the outbreak

At some point, Troy joined the Waterfront community, where he later joined the rebels for stage 2

Troy is first seen firing upon the survivors from Apex before eventually giving up. He is led inside to the cells by Sean Moreland after the shooting ends. Later, he is seen inside the his cell with three other rebels, including Sandy, when he hears a beeping from his jacket. The four of them, including the cell, are blown up by a jacket bomb by Harvey to start stage 3

Retrieved from "https://undeadfanstories.fandom.com/wiki/Troy_(Scatter)?oldid=209551"
Community content is available under CC-BY-SA unless otherwise noted.