Start a Wiki
Train is a character in Say Goodbye to America: Scatter
Train 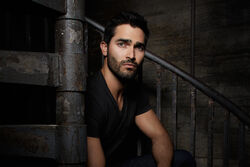 Nothing is known about Train's life before the outbreak

At some point, Train joined the Apex community as a member of the construction crew

Train is first seen with Scott Cleary, Ray and Cole in the construction area discussing Gavin Foxx and Sean Moreland. He is present when Warren Smith is bitten and subsequently amputated. He is later seen in Elizabeth Hill's office when Warren eventually dies and takes Lysander's place on guard duty. He is seen by Brooks and other members of the Yard scouting out Apex

Train is seen on guard on the wall when he sees Maine Ryan crawling towards Apex. He and Horace bring Maine into Elizabeth to help him out. While there, Train is made to get Meredith down for help

Train is seen when Bailey, Basil and Cole crash their car shooting and hitting Rick Murphy. During the rest of the attack on Apex, his gun jams and he is shot in the shoulder by Marcellus and later brought in to see Elizabeth.

Train is seen keeping guard when Nils and Izabel shows up. He calls for Eddie Hedd, Jack West, Aaron Meyer and Taylor Burns. He tells Nils and Izabel when to stop their car.

Train is seen working with Scott, Ruben and Santiago Montoya

Train is seen with Scott, Ray and Gavin digging four graves in the morning

Retrieved from "https://undeadfanstories.fandom.com/wiki/Train_(Scatter)?oldid=208779"
Community content is available under CC-BY-SA unless otherwise noted.