Start a Wiki
Tommard is a character in Say Goodbye to America: Scatter
Tommard 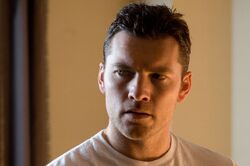 Nothing is known about Tommard's life prior to the outbreak

At some point, Tommard joined the O'Connor Compound

Tommard is first seen running from the Wiggins Outpost with Ozzy and the other survivors. He later takes part in ambushing the group from the outpost, shooting Shania in the gut and leg, causing her to fall down screaming and get devoured by biters. He is later seen when Amin Issawi and Peanut are present to Ned O'Connor and informs Noah that Tara and Darren were sent to find the Waterfront

Retrieved from "https://undeadfanstories.fandom.com/wiki/Tommard_(Scatter)?oldid=211089"
Community content is available under CC-BY-SA unless otherwise noted.