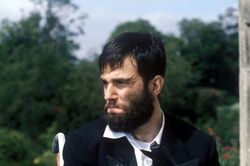 Nothing is known about his life before the apocalypse, except that he had an ex-wife

Todd first appears in Malcolm Marsh's camp after overhearing their conversation. He tells the group the dead are marching their way and they should all leave. He reveals to the rest of the group about the disease and the necessity to destroy the brain. He uses the analogy Weeds to describe the dead, as though they are high on a cloud and only wanting to eat. After Kylie is bitten, Todd shoots her after she turns

Immediately after Kylie's death, Malcolm lunges at Todd, who defends himself saying she turned. Todd joins a group with Lam Kendall, Chance Trice, Savannah Brooks and Christian Blake to search for supplies when they are separated by a herd of walkers. He ends up splitting with Lam

When Todd returns with Lam, he begins arguing with Malcolm over leadership, but the two quickly get over it. He ends up in a group with Malcolm, Lam and Miya Carena. He later ends up breaking the ice with Lawrence

Todd is seen talking with Lawrence in the camp about Scott and brings up the topic of Lawrence and Kara. He states he had his eyes on Clio. Todd and Lawrence end up talking about Tobias before Todd states something about his ethnicity that leads to awkward silence. He is later shot by Ryan in the gut and crawls away into the woods as Lawrence runs away thinking he's dead

He and Luke O'Hara were getting supplies for his group when Luke was attacked and killed by walkers. He came back to the group, and late at night, someone killed Harold Bach. It was later revealed to have been Marlton McClain. After they left the camp, he, as well as Phillip, Tara Friedman, Mark Masterson and Rain Wong found a cul de sac filled with walkers. Tara, Mark and Rain died while Todd and Phillip escaped

Phillip and Todd talk about past events as they walk towards a town a mile away. The pair enter a mall filled with supplies and goods. While searching, they find a large amount of walkers and take out five quietly after hearing gunfire. After finding the source of the gunfire, Todd rushes in to help the small group. After Phillip and Garrett pull out their guns, Todd does the same, but puts it away when told to by Aaron. After Matt is bitten on the arm, Todd chops it off with his fire axe

Garrett begins to aggressively question Todd about why he chopped off Matt's arm. Later, in Apex, Todd questions Fish on his nickname as he leads Todd to Jenny Hanson, where he is questioned as to why he should live in Apex.

Todd walks with Jenny towards Elizabeth Hill's office talking about how she will through a get together to introduce everyone. Eric Dugan walks up to Jenny and complains about his roommate, before introducing himself to Todd. After Eric leaves, Olivia Graham walks up to see Matt, and Todd tells her to be warned that there are less pieces of him then before. When she is informed that Todd cut off Matt's arm to keep the infection from spreading, she gives him a big hug. Before the party, Tess from the laundromat welcomes Todd and gives him clean clothes. Later, at the party, Jenny immediately introduces Todd to Nathan and Tracy. As he his talking about his previous life, Matt calls his name and introduces his girlfriend.

Todd and Phillip walk into Jenny's house after the party. Todd asks Phillip if he and Elizabeth are a thing, to which Phillip says no. Todd later chooses to be a guard for the town.

Todd talks with Phillip about the later going on the search party, asking if he'll be alright.

Todd awakens to find Timothy and Fish West knocking on his door. He and the brothers walk down to the church where he sits down next to Annie McGovern and listens to Jenny hold a service for Judy and explain what's happened and what's going on. She brings up the mall where he and Phillip were found and asks for Todd's input, where he explains it is overrun. He is later seen outside of the church eating a bagel and tosses one to Jenny. They talk for a while until Annie comes up to the pair. Jenny leaves and Todd heads back to Annie's place

Todd is seen in Annie's house sitting on her couch and asks about her age because, based on her looks, he assumes she is in her 20s. He listens as she explains her abusive ex-husband and her use of plastic surgery. He is later seen with Phillip and the West brothers discussing the mission to the mall

Todd is seen with Otis, Leo Henderson and Phillip discussing the mission to the mall when Eli Wilson walks up asking Otis is he needs anything. He is later seen in the mall with Phillip in the American Eagle outlet where the pair find pants and kill walkers. He is seen killing walkers when Eli is bitten

Todd is seen with Phillip, Fish and Timothy when Gregory and his 'B' squad show up and want their supplies. He watches Fish stab Lulu and Spencer shoot Timothy. He, along with Fish, carry Timothy into the U-Haul before driving off

Todd arrives back and talks to Otis and Jenny about losing Bentley, Tracy Long and (supposedly) Matt Graham.

Todd is seen getting dressed in Annie's house when he opens the door to find Taylor Burns, who lets herself in

Todd is present during the attack on Apex, during which he shoots and kills Bo Applewhite

Todd is seen at Jenny's door with Olivia and Dexter Hubbard informing them Owen finally died. He is later present during her meeting. He is later seen in Annie's house making two martinis

Todd is seen with Otis, Elizabeth, Lewis, Eli and Will Knight watching over an injured Nils. He eventually walks off with Eli

Todd is seen with Annie, Taylor, Eli, Dexter Hubbard and Oliver. When Annie goes out back to check a noise, he tells her to be careful

Todd goes off searching for Annie and instead finds the dead body of Logan Schiff and a pool of blood. He runs throughout Apex calling out her name in the middle of the night. Todd eventually finds her reanimated and cries out as Jenny puts her down. Eventually, Todd packs his bags and talks with Eddie Hedd about leaving Apex. He walks out and never returns

Todd is seen walking by himself through the woods when he comes across the Wanderer, and shares a meal with him. Todd reveals that he will be heading towards Cincinnati while the Wanderer states he is heading towards the Great Lakes. Eventually, Todd flashes back to a time with Luke, Mark, Marlton, Rain, Tara and Harold when the latter two had joined the group. The flashback was brought on by seeing the zombified corpse of Mark, but Todd instead does not put his friend down. Later, Todd and the Wanderer are clearing a house when Todd is bitten on the left hand before the Wanderer can cut it off. Todd then passes out

Retrieved from "https://undeadfanstories.fandom.com/wiki/Todd_Andrews_(SGTA)?oldid=209562"
Community content is available under CC-BY-SA unless otherwise noted.