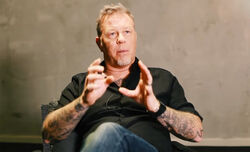 Nothing is known about Thomas's life before the outbreak

Packer is first seen with Dave O'Connor and Asher Praedo giving food out to the prisoners in one of the cells. When Eli Wilson attacks him, Packer quickly overpowers him and sends him off with Copper and Karim Fadil

Retrieved from "https://undeadfanstories.fandom.com/wiki/Thomas_Packer_(Scatter)?oldid=209409"
Community content is available under CC-BY-SA unless otherwise noted.