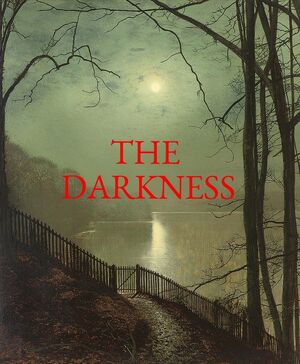 The Darkness is a supernatural drama written by Halloweve 15.

Humans are a race of mortal, sentient animals (may I inject something here - humans are sentient beings, not animals; animals don't have souls, humans do) who are members of the species "Homo Sapiens". Humans serve both as a food source as well as a means of pro-creation for vampires, who reproduce by performing a ritual that will transform a human being into an undead immortal. Humans make up for the majority of the earth's population, and are commonly noted for their desire to influence and understand the environment by seeking to explain and manipulate phenomena through mythology, philosophy, religion, and science.

The primary abilities of every human being include adaptability and versatility. For the most part, humans are outmatched by supernatural beings and are most often defeated whenever confronted by a superior creature. However, some humans have been known to utilize tools and weapons and have managed to succeed in a supernatural combat. Therefore, as a means of survival, most humans must rely on intelligence, research and teamwork in order to prevail.

Due to the fact that humans are commonly noted for their tendency to fear the unknown, many of the humans who are aware of the supernatural have built societies that are dedicated to hunting and killing all supernatural beings, especially vampires. Generally, these hunters use advanced knowledge of folklore to hunt, identify and murder any and all threats to humanity. They are able to modify conventional human weaponry such as guns and knives to repel and/or kill supernatural beings that are often more powerful than they are.

Vampires are magically reanimated corpses who are inhabited by the spirits of the deceased and who closely resemble a living person. Vampires feed and survive on the blood of the living, typically on human blood, and they can transform other humans into more of their kind.

The supernatural forces that sustain vampires also endow them with superhuman physical abilities as well as powers of mind control. Their physical abilities such as strength, speed, agility, durability, healing and senses all grow stronger with age and experience. Vampires who feed on animal blood will not be as powerful as those who feed on human blood. Human blood is also known to increase the speed of healing when ingested by a vampire after being seriously wounded.

If vampires are killed by a wooden object stabbed through their heart, their body desiccates into a gray color, and their vampiric veins thicken and protrude from their skin. Vampires can build up tolerances to some weaknesses, such as vervain, allowing them to protect themselves from compulsion by an Original and to help lessen the likelihood that it will seriously incapacitate them when used by enemies. However, it will still burn them upon contact, but if ingested, it will not weaken them as much if they take small amounts over time.

A witch is a man or woman who is born with the power to affect change by magical means ("Witchcraft"). While many witches are self-proclaimed Keepers of the Balance, other witches are known to work against the Balance, and use their power for personal gain.

Magic is a practice of witchcraft that encompasses many different types of activities including astrology, divination, spell casting, and spirit communication. It includes the practices of many cultures, nations and religions as well as many books and writings from ancient times. Depending upon the individual, some witches practice their power by certain belief systems, such as Shamanism, Voodoo, Wicca, or any number of other magical practices from countries and cultures all around the world. Although the majority of traditional witches are commonly portrayed as being kind and selfless humans who use their powers to maintain balance within the world. It has been proven that some witches are independent thinkers who may go against the Balance of Nature by practicing their powers for dark and sinister deeds.

Weaknesses of a witch include disbelief, distraction, fear, special herbs, magic (even their own), mortality and overexertion.

Werewolves (also called Lycanthropes, Loup Garou, Beasts, or even just Wolves for short) are a near-extinct supernatural shapeshifting species of individuals who unwillingly transform into large, fearsome and extremely hostile wolves on the night of the full moon. Even in their human form, werewolves possess superhuman physical prowess, but not to the same level as a vampire, and not as powerful as the abilities they have on a full moon. These creatures are the most dangerous enemies of vampires, due to their venomous bite, which is lethal to them. Werewolves are also hardwired to kill vampires on sight in their wolf form, though they still hunt human prey whenever there are no vampires to kill.

Werewolves' strength and speed are enhanced and are at their peak during time under a full moon. When angered or threatened, these powers and abilities are temporarily enhanced.

Vampires and werewolves can be damaged in the same ways humans can, and in most cases will only be briefly weakened. However, werewolves are still mortals, and thus can be killed or incapacitated in various ways.

A medium is a person with the power to communicate with the spirits in purgatory.

Having been brought back from the dead allows the bearer to perceive ghosts who are normally invisible, as long as they had known the deceased when they were alive.

Mediums have the same weaknesses as humans.

Werewolf/Vampire hybrids have the powers and abilities of both werewolves and non-original vampires/original vampires, both physically enhanced powers and abilities of mind compulsion. Non-Original Hybrids will grow stronger with age due to their vampirism and will also increase in strength when enraged, due to their Werewolf side. Their strength will also increase during a full moon.

Witch/Werewolf hybrids also exist, though they are rare.

A Witch/Vampire hybrid has long been thought to be impossible. However, a subsection of mutated witches with the ability to siphon magic have shown to bypass this rule.

Tribrids can also exist, though they are more rare than witch/werewolf hybrids.

A Ghost was the soul and spirit of a deceased person that could, under certain circumstances, appear as a visible manifestation to the living, and in even rarer circumstances, physically interact with the living world. They reside in purgatory.

Weaknesses include isolation and magic, but a special knife can "kill" them.

Phantoms are malevolent spiritual entities created from human souls who have suffered through extensive pain and torture. They feed off the emotions of the living. Phantoms reside in purgatory.

They have the same weaknesses as ghosts, but a special knife can "kill" them.

Siphoners are a subsection of witches born without the initial ability to generate magic. Instead, they could absorb it from other sources. The magic they absorbed can later be casted.

They have the same weaknesses as witches.

As supernaturally gifted hunters, members of the Brotherhood of the Five possess and are endowed with peak-human physical abilities, such as strength, speed, agility, reflexes, and endurance. They hunt down supernatural beings and kill them.

They have the same weaknesses as humans.

Immortals are a species of supernatural beings that are truly immortal and cannot be killed by any weapon. Immortals can be considered as the template for vampires. However, Immortals differ from them in many different ways, and vice versa. The biggest of those differences being that they are not undead like vampires. They also do not possess the superhuman physical powers of vampires, but control far superior psychic powers.

Immortals possess supernatural physical as well as psychic abilities. Although they are the first vampiric life forms to exist, their physical abilities e.g. their strength and speed etc. are noticeably inferior to that of vampires and do not increase over time. Their psychic powers grow stronger with human blood and by simply honing them over time.

Despite being truly immortal and being incredibly powerful in their own right, Immortals have some weaknesses, typically human ones.

A spiritual dimension that is exclusive to the souls of every deceased supernatural being.

A heavenly dimension of ultimate peace. It is a beautiful realm that is supposedly populated by every soul (both human and non-human) that has successfully found peace.

A hellish dimension of ultimate misery. It is a dreadful realm that is supposedly populated by every soul (both human and non-human) that has failed to find peace (go to paradise).

Season 1 will consist of 15 episodes.

Retrieved from "https://undeadfanstories.fandom.com/wiki/The_Darkness?oldid=173609"
Community content is available under CC-BY-SA unless otherwise noted.