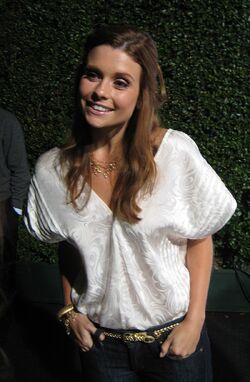 Taylor Burns is a character in Say Goodbye to America: Scatter

Nothing is known about Taylor's life before the outbreak.  It is possible that she had some training in nursing or physical therapy

At some point, Taylor joined the Apex community

Taylor first appears among the rescue crew to save Niklas.  She and Eric Dugan take first watch upon their arrival at the Target.

Taylor appears talking with Leo about Dexter Hubbard and Jason.  She takes Dex by the hand and leads him back to rest and check for permanent damage.  She later appears after the Massacre at the Target, having stayed inside with Dex.  She is given the wounded Doug Santos and Gavin Foxx to check up on.  She later tells Leo that he needs to see Gavin's unconscious body to get his approval on her patching him up

Taylor walks out after the Massacre with Leo, Aaron and Niklas where the four put down the bodies to keep them from reanimating. She is uncomfortable putting down Tim, but ultimately does so

Taylor is seen at Annie McGovern's door and is greeted by a shirtless Todd Andrews, which she comments about. She lets herself into Annie's room

Taylor is seen with Eddie Hedd, Jack, Miranda and Evan Curtis when Izabel and Nils arrive at Apex. She pats down Izabel and brings her in to see Jenny Hanson

Taylor sits with Todd, Annie, Dex, Eli Wilson and Oliver at night. She reveals, albeit aggressively, that she and Dex are in a "no strings attached" relationship. She later watches Annie go outside to shoo away a cat

Taylor is seen searching with Todd for Annie, trying to calm him down. She later appears with Otis after he is bitten.

Retrieved from "https://undeadfanstories.fandom.com/wiki/Taylor_Burns_(SGTA)?oldid=208804"
Community content is available under CC-BY-SA unless otherwise noted.