Start a Wiki
Tara Friedman is a character in Say Goodbye to America: Scatter
Tara Freidman 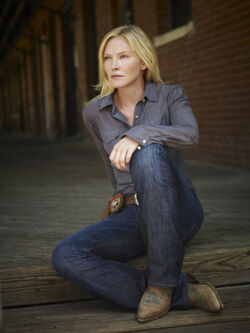 Nothing is known about Tara's life before the outbreak

At some point, Tara and Harold Bach made their way to Todd Andrew's camp.

Tara is first seen worried about Todd and Luke O'Hara and the supplies they may or may not return with. She finds Harold's corpse first and alerts the others to it. She is aggressive in finding out who killed him and after finding out it was Marlton McClain and Harold his a bite, she is unable to kill Harold's killer. She later goes to the cul-de-sac with the others and keeps watch. She is later seen being torn apart alive as the others try to escape

Tara appears with Harold when the pair enter Todd's camp. After a short standoff, the pair are allowed into the camp with little hostility

Retrieved from "https://undeadfanstories.fandom.com/wiki/Tara_Friedman_(SGTA)?oldid=209307"
Community content is available under CC-BY-SA unless otherwise noted.