Take the Oath is a spin-off story to The Walking Dead Game, written by Headaches. It could be considered to be Season 3. The title is subject to change.

"The apocalypse hit her like a train on a track. Coming towards her, stuck still no turning back. She hid around corners and she hid under beds. She killed it with guns and from it she fled. Running fast for her mother and fast for her father. Running for her children, for her sisters and brothers. Leaving all love and all longing behind, she can't carry it with her if she wants to survive." 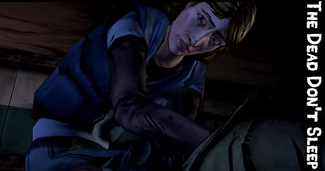 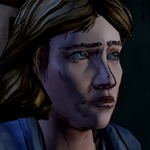 TBA (our protagonist) -  A widowed ex-mother of three boys that has, against all odds, survived two years into the apocalypse. Sore eyes carry the heart-breakingly tragic events that TBA was forced to witness, to make her into the person that she is today. 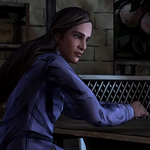 Natalie - Having previously worked and lived at a children's home, Natalie has a natural talent in befriending children. When she meets our protagonist the two soon become best friends. However, the children that Natalie brings with her are a saddening reminder of TBA's three deceased sons. 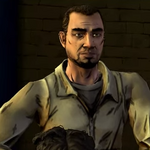 Viktor - As you would expect, Viktor brings brawn to the group. This man is originally from Germany, having come over to the US after hearing about news of a city-wide safe-zone. Viktor means well but he is very cold and keeps his emotions to himself.

More characters will be announced in the future.

As choice is a big part of The Walking Dead Game, you will be able to make choices. The choice are able to be made thanks to the wikia's multiple passage selector. There is an example below, click on each tab to view the possible choices.

There will be a different passage of text here to what is in the other option. In this case, you would have saved Allison and Albert would have been left for dead.

There will be a different passage of text here to what is in the other option. In this case, you would have saved Albert and Allison would have been left for dead.

Retrieved from "https://undeadfanstories.fandom.com/wiki/Take_the_Oath?oldid=151508"
Community content is available under CC-BY-SA unless otherwise noted.