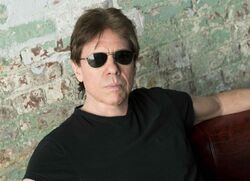 Nothing is known about Stuart's life before the outbreak, except that he was a Major in the U.S. Army

At some point, Stuart took command of the Soapstone Trail Military Base

Stuart is first seen in the briefing room with the rest of the survivors in the base. He talks to Jason Herr about the garden, Dr. Harold Martin about the studies and eventually joins the supply run to grab more utensils for the doctor. He does not return, and Captain Lucas McDermott says he ran into a pack while trying to save others. McDermott reveals to Harold he actually shot Stuart to take control of the base

Retrieved from "https://undeadfanstories.fandom.com/wiki/Stuart_Montgomery_(Scatter)?oldid=211103"
Community content is available under CC-BY-SA unless otherwise noted.