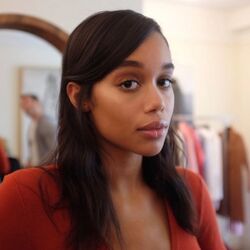 Stephanie is seen being comforted by Lewis, Kevin and Maine after being attacked by Richard and Johnny. She is later seen after Maine returns with Max and Taz, where she reveals was raped by the other men because she is a lesbian

Stephanie is seen talking with Virginia, Annabelle and Arrowhead about getting high after thinking about if she might be pregnant. After being injected with heroin by Virginia, she stays in the latter's tent. Once Virginia leaves, she takes a large amount of pills she stole and closes her eyes. She eventually dies and turns and half-devours Virginia before attacking an unnamed survivor as well. She is eventually put down by Lewis

Retrieved from "https://undeadfanstories.fandom.com/wiki/Stephanie_Key(SGTA)?oldid=207349"
Community content is available under CC-BY-SA unless otherwise noted.