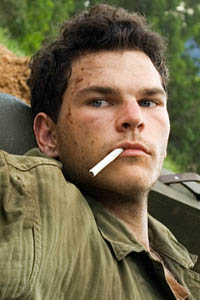 Spencer is a character and secondary antagonist in the first two seasons of Say Goodbye To America: Scatter

Nothing is known about Spencer's life before the outbreak

Spencer is first seen during the Manhunt for Leo and is told to stay at their spot with Michael. After the other groups split, Michael offers Spencer a piece of gum and he accepts.  Spencer immediately leaves Michael, whom he cannot stand.  He later appears after coming across a dead body with the zombified remains of Maxwell gnawing at it.  After putting Maxwell down, he notices the body is that of Michael's.  Following his own code, Spencer puts Michael down rather than let him turn

Spencer is seen with Liam holding Sean Moreland down before the fight starts. He explains that the man who distracted Sean was from the Apex group. He later watches as Sean kills Avi in the ring and is sent away from the group. Later, in his trailer, he sits with Izabel, Brooks, Nils and Cosmo when Brooks suggests killing Gregory, which the rest of the group disagrees with

Spencer joins Gregory and the 'B' Squad on a mission to the mall. He rides with Kenneth, Lulu, Miles and Julian. Once inside, he joins Brooks and Lulu in the nail salon.

Spencer joins Gregory and the rest of the 'B' Squad investigating the screams from earlier. He watches as Fish stabs Lulu, and, in retaliation, Gregory tells Spencer to shoot someone. Spencer then shoots Timothy West in the gut. Later, as the group runs from the horde, they exchange gunfire with Dimitri, Nathan, Aaron and Garrett

Spencer is driving along the road back to the Yard when he sees too many walkers and freaks out, overturning the car and causing a crash. This ultimately leads to Margot's death. He is later taken back by the others when they arrive

Spencer searches for Apex with Brooks, Nils, Rick Murphy and Maine Ryan when they see Train take watch. He is present when Brooks shoots Maine and drives off

Spencer appears in his trailer with Brooks, Nils, Marcellus and Will Knight when Lewis comes in to ask Brooks about Maine

Spencer appears during the attack on Apex, during which he takes control of the gun on the truck and fires on Apex, killing three survivors, before ultimately being killed by Lysander

Spencer is seen in a photo taken of him, Liam, Brooks, Lottie and Liam's sister Emily after graduation. It is revealed Spencer and Lottie once dated, and the two still loved each other but were not able to have a relationship in the apocalypse

Retrieved from "https://undeadfanstories.fandom.com/wiki/Spencer_(SGTA)?oldid=208509"
Community content is available under CC-BY-SA unless otherwise noted.