Start a Wiki
Seth Young is a character in Say Goodbye to America: Scatter
Seth Young 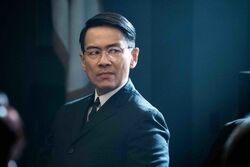 Nothing is known about Seth's life prior to the outbreak

At some point, Seth joined the Waterfront Community

Seth is first seen working under Leo Henderson at the Wiggins Outpost. Although unseen, he takes part in the fight against the attackers from the O'Connor Compound

Seth appears during the meeting in the Waterfront theater. he leaves with the rest of Garrett Smith's guard shift group heading towards the armory. After Nick D'Atomeo begins to choke Dustin Hammond, Seth tries to get him to calm down and follows the latter after he leaves alongside Horatio Whittaker

Seth appears with Reina and Richard Harris in the infirmary when the survivors from the O'Connor Compound attack, trying to help Jed Armitage survive his surgery. After Jed dies, Seth puts him down before he can turn

Seth will appear in this episode

Retrieved from "https://undeadfanstories.fandom.com/wiki/Seth_Young_(Scatter)?oldid=211203"
Community content is available under CC-BY-SA unless otherwise noted.