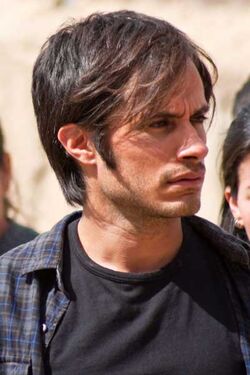 Sebastián Bernal is a character in Say Goodbye to America: Scatter

Nothing is known about Sebastián's life before the outbreak

At some point, Sebastián joined Octavio Arévalo and Evan Curtis

Sebastián is first seen with Octavio walking along the road before jumping into the woods and hiding when a truck drives by. He is later seen in the night explaining to Octavio that he sees his daughter in his dreams and nightmares before crying himself to sleep

Sebastián appears with Octavio when the pair come across Matt Graham and tell him not to do anything stupid. The trio decide to look for Evan and then head to Apex

Sebastián is seen with Matt and Octavio inside their old camp when he saves Evan from killing Matt. The four then decide to head to Apex together

Sebastián and the others arrive in the aftermath of the attack on Apex and watch as Octavio saves Matt from an undead Lindsay Meyerson. The other three comfort him

Sebastián is seen in Jenny Hanson's house with Octavio and Evan during her meeting. He volunteers to go out on the mission to get more supplies and rebuild Apex. He rides off with Doug Santos, Olivia Graham, Jackson Allen and David Blair.

Sebastián is seen fighting the walkers when the group is trapped on the road. He saves David Blair and helps him into the car while Doug sacrifices himself so the others can leave. He is later seen at the Train Station and is introduced to Ciara Nash.

Sebastián and the others are introduced to Chester Navarro, Barney Munson and Arturo Vazquez and head on towards Waterfront. Once arriving, he is introduced to Blake Miller, the guard, and is brought into the infirmary to meet Dr. Richard Harris and Kayleigh. The Apex survivors, minus David, are brought to meet Shoshana Adams

Sebastián and the others are caught up in the Midnight Rebellion running through the Waterfront community. He and Leo help Chester deal with Ivan Petrova in the aftermath

Sebastián, Phillip and Leo talk with Vazquez and Chester about sending soldiers and supplies to Apex. They eventually reach an agreement. He is seen driving off with Leo, Phillip and Ciara back to Apex

Retrieved from "https://undeadfanstories.fandom.com/wiki/Sebasti%C3%A1n_Bernal_(SGTA)?oldid=209568"
Community content is available under CC-BY-SA unless otherwise noted.