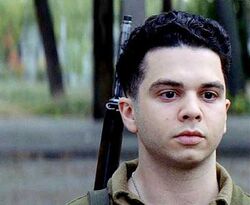 Scott Cleary is a character in Say Goodbye to America: Scatter

Nothing is known about Scott's life before the apocalypse

At some point, Scott joined the Apex community, where he became a member of the construction crew

Scott and Garrett switch jobs before the attempt at rescuing Niklas.  He appears at Leo's meeting before the crew leaves.  He is joined by Dimitri and Aaron to scout the area to make sure it can be fortified.  He later calls up Ray on his walkie, who is not willing to send over three workers to help build up the Target.  Scott instead decides to call up Jenny Hanson and go over Ray's head.  He then takes out a lone walker with a metal bar.  He talks with Aaron about using the same pole as a way to keep the dead at bay

Eric Dugan wakes Scott up to take over for guard duty.  Scott grabs his portable MP3 player, clips it to his belt, and plays the song while he stands guard

Scott appears with Phillip and Dimitri Vanderbilt early in the morning and talks with Leo about plans to keep the Target safe. He is present during the Massacre at the Target, during which he shoots and kills Colin and witnesses Tim die. After the Massacre, he assists an injured Doug Santos and prevents an already dead Norman Monroe from turning. Scott talks with Ruben Eastview about how and why they showed up at the Target and is present when Leo returns with Niklas

Scott is seen talking with Warren Smith, Paul and Doug about Ray before they leave with Sylvester.

Scott is seen with Warren and Gavin Foxx in Jenny's house with the idea to make Gavin a construction crew member. He, along with Warren and Jenny, to see that the new guy, Sean Moreland, already knew Gavin

Scott is seen with Warren leading the new members of the construction crew to the site, where he and Ruben meet with Ray about Sean and Gavin

Scott is seen with Bailey and Sean taking out biters after Warren is bitten and subsequently amputated. Scott later makes his way over to Dimitri's house and joins him and Phillip for some scotch to vent about what happened to Warren.

Scott is seen with the others when Ray has a meeting about Warren. He explains how Warren helped him get over the dead of someone named Molly

Scott is seen riding with Paul, Owen, Doug, Sean, Gavin and Train back to Apex, unaware of Gregory Ames's attack. During the attack, Scott runs with Sylvester and Devin after Bailey is shot in the head and flips her car over. He is later shot in the foot and saved by Devin. Scott is later seen in the infirmary with Otis

Scott is seen in his room listening to a vinyl record. He also attends Jenny's meeting

Scott is seen with Otis and Maine Ryan when Will Knight wakes up in the infirmary. He is very blunt when telling Will what happened to the army from the Yard.

Scott is seen with the rest of the construction crew at the destroyed church with blueprints on how to rebuild it. He argues with Ruben on how effective the prints will be in fixing the church. The two, along with Gavin and Sean, help Santiago Montoya when his ladder slips from underneath him, saving him from a hard fall.

Scott is seen talking with Ray about why he is still awake late at night. Ray asks him to turn his music down so he could get sleep. When Ray leaves, Scott picks up his book and reads

Scott is seen with Ray, Train and Gavin digging graves for Logan Schiff, Annie McGovern, Otis and Maine in the aftermath of the previous night

Scott is seen in the church, having finally completed it with the others in the construction crew. He gives a sermon while drunk. Once he finishes, he stumbles his way over to a seat in the pews

Retrieved from "https://undeadfanstories.fandom.com/wiki/Scott_Cleary_(SGTA)?oldid=209332"
Community content is available under CC-BY-SA unless otherwise noted.