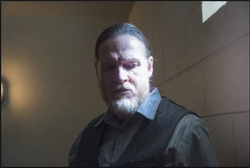 Nothing is known about Ruben's life before the outbreak, except that he used to work with Warren Smith and Ray

At some point, Ruben joined the Apex community as a member of the construction crew

Ruben is present during the Massacre at the Target, during which he shoots and kills Maria and Kenzie alongside Warren and Lindsay. He later shoots Gavin Foxx in the back of the leg to keep him from running. He later talks with Scott about Jenny and Ray's views on them leaving.

Ruben is seen with Leo, Dex Hubbard, Sylvester Nelson, Doug and Taylor inside the Target when Niklas walks up to him and asks him to stay behind to complete Niklas's list. Later that evening, Ruben shoots and kills Liam and Callum before starting his car and waiting for Niklas to kill Alex

Ruben later arrives back at Apex with Niklas when Otis opens the gate. Ruben brings his car back to his house

Ruben later appears with Warren, Scott, Gavin and Sean Moreland walking over to the construction area. He joins Ray and Scott in the former's tent to discuss Gavin and Sean's arrival

Ruben is seen with Cole and Doug Santos pulling a large chunk of siding off of a house when the latter falls and scrapes his arm. Ruben takes Doug inside to patch him up when the pair hear Warren scream, get bit and is subsequently amputated. He is later seen back at Apex with Owen, Bailey, Ray and Train talking with Otis and Jenny when they find out Warren has died.

Ruben is present for Ray's eulogy

Ruben rides with Ray, Sylvester and Devin Nelson back to Apex after Ray receives word that Gregory Ames is attacking the town. He later appears with Ray and Leo Henderson when Matt Graham, who had been presumed dead, arrives back to Apex with three men: Sebastián Bernal, Octavio Arévalo and Evan Curtis

Ruben is present during Jenny's meeting

Ruben is seen with Scott Cleary, Santiago Montoya and Train when Santiago loses his footing on the ladder, which drops as he is left dangling. Ruben watches as Gavin and Sean bring him down. Later, Ruben is seen with Sean and Eli Wilson taking Niklas to Jenny's house after Niklas stabs Nils in the gut.

Ruben is seen talking to Niklas through the door to the room the latter has been placed in. Ruben then leaves Niklas some beef jerky for a snack. Later, inside Elizabeth Hill's office with Nils and Lewis Edwards, Ruben is approached by Matt, Izabel and Aaron Meyer. He is questioned about Niklas's list and reveals he was the one who killed Liam and Callum. He is startled by Nils waking up

Ruben tells Nils that Niklas tried to kill him

Ruben is present when Otis reveals his bite to a small crowd of people. He is later seen at the sunrise chugging down an alcoholic beverage and laying back on his bed

Ruben is seen with Sean and Gavin, along with the rest of the crew, inside the half built church

Ruben is seen with the other Apex survivors in Jenny's house after the church sermon. He later answers the door when the other survivors in the town arrive in her house and they all start drinking again

Ruben is present when Jenny calls a meeting at her porch. He yells for the crowd to quiet down. He volunteers to go the Waterfront and help out the survivors there

Ruben is seen firing on the Waterfront rebels, shooting Sandy in the shoulder. He watches as Gavin, Santiago, Taylor and Donnie head to the F350 before it explodes. He later appears with Sean and Sylvester trying to save the now blinded Gavin before Ruben is bitten on the shoulder. As Ruben is being devoured, Sean shoots him in the head

Retrieved from "https://undeadfanstories.fandom.com/wiki/Ruben_Eastview_(Scatter)?oldid=209574"
Community content is available under CC-BY-SA unless otherwise noted.