Ricardo "Cardo" Montero is a main character of Sin City. A former thug who made violence his life, Ricardo has since reformed alongside fellow former criminal, Isa Martha and their daughter, Isela. Following the rise of corruption and crime in the city, Cardo stepped up as one of the city's reform leaders. Opposing the mysterioys Amon and Carley, Cardo advocated for peace and lamed both the Goulds and Liberty for the problems of the city. His rise in popularity bought about demons from his past, such as ex friend Iran, who wished to prove to Cardo he was no better than him. This, along with the politics of the city, drove Cardo back to anger, eventually causing his campaign to collapse. The increasing anger and Iran revealing that Cardo killed Isela's father caused a wedge between them. During Amon's rule of Miami, Cardo confronted Iran, who had captured Isa Martha and Isela. Overcoming his anger and want for revenge, Cardo spared Iran's life and saved his family, re-cementing his love for Isa Martha in the process.

Having made peace with his past mistakes, Cardo once again set his focus on improving the city. Initially helping out with charity, Cardo stepped up to run for mayor following Robert's death. Opposing Trevor Lincolns--a wealthy man from another city who represented the same--Cardo grew in support due. However, his honorable ways did not blend with the politics of Miami, as corrupt forces tried making Cardo bend the knee to them. Cardo remained determined even in the face of scandals of past criminal deeds of him and Isa Martha released. Following his surprising win, Cardo refused to bow once more and focused on rebuilding Miami. However, Isela was killed in response to both this and her investigation into the forces. Broken by the guilt of his stubborness, Cardo abandoned his position and exiled himself from the city with Isela.

Out on his own, Cardo tried balancing his guilt and need to support Isela. As Shado continued to conquer Florida, Cardo continued to run and hide. Following a meeting with Frost, she helped him get back on track, while he helped her find her humanity. Following Shado's defeat, Cardo was instrumental in helping rebuild the group and played a crucial role in the retaking of Miami under Cabal rule. Following the battles, Cardo stepped up to be the leader of the new Miami, alongside Jack Hayter.

In his youth, Ricardo was a brash and volatil, easily provoked and highly feared. Still, he was serene. Now an adult who has survived a life of crime, Ricardo is more calm and appreciative of life, even more so now that it has given him a second chance. While many still view him as criminal scum, Ricardo doesn’t blame them, often letting his honest work and nurturing of his daughter speak for him. Those few who see this change can see him for the reformed man who served his time that he is.

Due to this, Ricardo is a man of few friends who is reserved once he’s approached. He loathes crime and is fully convinced that he will never return to it again. His new fuel is his love for Isa Martha and Isela. 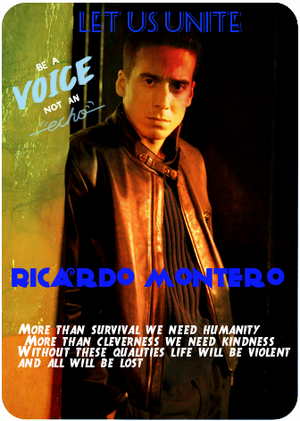 Retrieved from "https://undeadfanstories.fandom.com/wiki/Ricardo_Montero_(Sin_City)?oldid=209185"
Community content is available under CC-BY-SA unless otherwise noted.