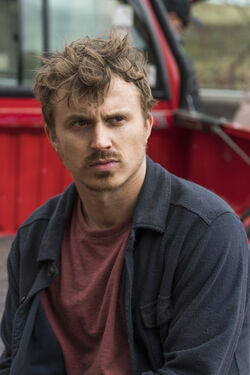 Reid is a character in Say Goodbye to America: Scatter

Nothing is known about Reid's life before the outbreak

At some point, he joined Gregory's group

Reid, along with Alex and Maxwell, search the area for Leo.  Reid holds Jason at knife point.  Reid is not too pleased about Leo's deal with Alex, and after the latter leaves, Reid shows his displeasure by slicing Jason's throat open.  He is then quickly shot between the eyes by Leo

Retrieved from "https://undeadfanstories.fandom.com/wiki/Reid_(SGTA)?oldid=207320"
Community content is available under CC-BY-SA unless otherwise noted.