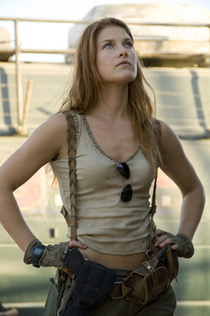 Nothing is known about her life before the apocalypse

At some point, she was part of a small group in the woods

After the deaths of Marlton, Luke and Harold, Rain and three of her friends found a cul de sac. They slept for the night until they were interrupted by walkers. She, Todd, Phillip and Mark all grabbed guns to fight their way out of the cul de sac, passing Tara being torn apart. Rain is bitten by a walker, and then shot by Todd to prevent her reanimation

Rain is seen in Todd's flashback playing cards with Todd, Luke, Mark and Phillip. She is present when Tara and Harold enter from the woods with guns drawn. She eventually allows the pair to enter the group

As she was being devoured by walkers, Todd shot her in the head

Retrieved from "https://undeadfanstories.fandom.com/wiki/Rain_Wong_(SGTA)?oldid=209300"
Community content is available under CC-BY-SA unless otherwise noted.