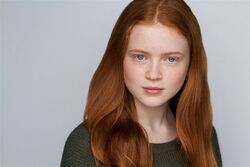 Nothing is known about Piper's life before the outbreak, except that she lived with hr family

At some point, Piper joined the Apex community with her family

Piper is first seen with Rick and Chuck playing cribbage. She later hears of her mother's death

Piper is inside the schoolhouse after it is bombed by Miguelito. She is able to escape, but loses her brother in the fire

Retrieved from "https://undeadfanstories.fandom.com/wiki/Piper_Conrad_(SGTA)?oldid=207412"
Community content is available under CC-BY-SA unless otherwise noted.