Start a Wiki
Patrizia is a character in Say Goodbye to America: Scatter
Patrizia 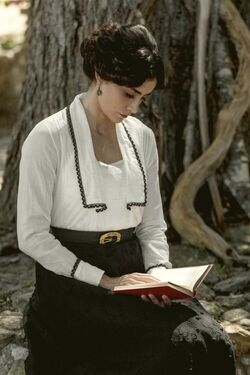 Nothing is known about Patrizia's life before the outbreak

At some point, Patrizia made her way to the O'Connor Compound, where she was held as a prisoner

Patrizia is first seen when Eli Wilson first reveals the prisoners have been eating human flesh. She also appears when Peanut and Victor Montrose reveal they can help them all escape from the Compound

Patrizia appears when Victor and Peanut return, ready to leave the Compound. She questions Cole when he reveals Apex, where they plan on going, has warm beds. Later, she flees into the woods with everyone else. She rides with Fish West, Garrett Smith and Shania. When one of the vehicles gets stuck in mud on their way there, Patrizia and everyone else hop out to take on biters. Patrizia is unable to fight off all the undead, and is bitten on the neck and devoured while the others escape

Retrieved from "https://undeadfanstories.fandom.com/wiki/Patrizia_Torres_(Scatter)?oldid=209838"
Community content is available under CC-BY-SA unless otherwise noted.