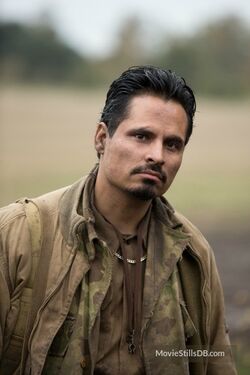 Nothing is known about Pablo's life before the outbreak, except that he was a Private (First Class) in the U.S. Army

Pablo is first seen with Col. Roscoe Jefferson, Pvt. Charles Pinkley, Dr. Hollis Echlain and Dr. Aidan Stockdale when Hollis shows off his latest attempt at a cure. He watches as the supposed cure takes immediate effects, but does not work. He later watches Cpl. Jeff Lever bring Luka out at gunpoint

Retrieved from "https://undeadfanstories.fandom.com/wiki/Pablo_Jimenez_(Scatter)?oldid=209420"
Community content is available under CC-BY-SA unless otherwise noted.