Start a Wiki
Ozzy is a character in Say Goodbye to America: Scatter
Ozzy 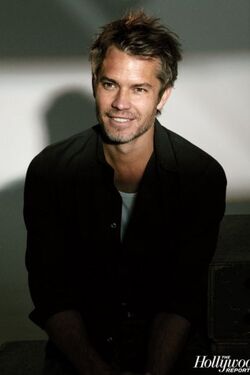 Nothing is known about Ozzy's life prior to the outbreak

At some point, Ozzy joined the O'Connor Compound

Ozzy is first seen with a dying Franklin and Anna Cook, and later uses Franklin's idea of wearing biter skin to lead a herd to the Wiggins Outpost. During the attack, Ozzy sets up a system for sending his people to attack the outpost by snapping his fingers

Ozzy leads the group back towards the O'Connor Compound and puts a plan in place when they realize they are being followed. He has his group play dead in the biter skins on the ground in the clearing before ambushing the small group from the Wiggins Outpost. Ozzy stabs John in the gut with a spear before swiping it across to the other side and finally stabbing John in the head. Ozzy later takes Amin Issawi and Peanut back to the O'Connor Compound and leaves Nathaniel as a messenger. Once back at the Compound, Ozzy tells Ned O'Connor about their use of the skins of the dead as a surprise attack

Ozzy is seen when Noah presents the members of the armada to the other survivors, either dead or alive, where he brings a bound and gagged Matt and keeps the latter steady after revealing his dead sister

Ozzy will appear in this episode

Ozzy will appear in this episode

Ozzy will appear this episode

Retrieved from "https://undeadfanstories.fandom.com/wiki/Ozzy_(Scatter)?oldid=211220"
Community content is available under CC-BY-SA unless otherwise noted.