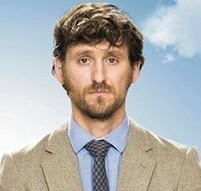 Octavio Arévalo is a character in Say Goodbye to America: Scatter

Nothing is known about Octavio's live before the outbreak

At some point, Octavio joined Sebastián Bernal and Evan Curtis

Octavio first appears with Sebastián on the road when the pair drop into the woods as a large truck drives by. He is later seen keeping watch as Sebastián has trouble sleeping. He tells Sebastián to sleep

Octavio and Sebastián appear after finding Matt Graham and telling him not to try anything stupid. The three decide to find their friend before leaving for Apex

Octavio appears with the other two in their old campsite looking for Evan. After Matt is held at gun point, Octavio sees Evan again. The four decide to head for Apex

Octavio is seen keeping watch with Evan discussing whether or not they should trust Matt. Ultimately, they decide to trust him

Octavio and the others arrive back at Apex in the aftermath of the attack on Apex. He saves Matt's life from an undead Lindsay Meyerson and try to comfort him

Octavio, along with Sebastián and Evan are in Jenny Hanson's house during her meeting. He is shocked when Sebastián volunteers to leave and find supplies to rebuild Apex

Octavio appears with Evan guarding the gate when Lewis and Julian arrive at Apex. He is told by Todd to let them in

Octavio is seen with Evan leading Lewis and Julian into Apex

Octavio is seen with Evan talking to Sebastián, Dimitri Vanderbilt and Nathan about their trip.

Octavio is seen exiting the church with Eli Wilson. Sebastián asks him where he is going and Octavio lies and tells him the pair are going on a supply run

Octavio is seen driving around in the '68 Camaro. He asks how much longer they're gonna look for

Octavio and Eli are seen driving along the road when they stop for three people, Samantha, George and Harris Moore, who tell the pair they have car troubles and an injured friend. While they try and set up the car for the survivors, a couple more vehicles drive their way and the pair find the three other survivors aiming in their direction. Ned O'Connor steps out and has Noam and Copper take the pair's weapons. After a while, Octavio reaches into his waistband to pull out a map, but George and Harris think it is a gun, so the latter shoots Octavio in the head, killing him instantly. His body is dragged by Dave O'Connor to another truck

Retrieved from "https://undeadfanstories.fandom.com/wiki/Octavio_Ar%C3%A9valo_(SGTA)?oldid=209557"
Community content is available under CC-BY-SA unless otherwise noted.