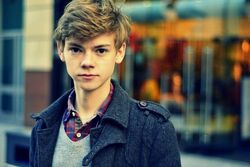 Niklas is a character in Say Goodbye to America: Scatter

Nothing is known about Niklas's life before the outbreak

At some point, Niklas joined the Apex community as a member of Leo's scavenging crew.  He is known to known to hang around with Bentley, Matt Graham and Carl

Niklas first appears as part of Leo's group 100 miles away from Apex, keeping watch with Meredith.  After the group discovers the Target, Niklas is told to stick with Judy to make sure he is able to leave on time.  He and Judy search the electronics for batteries and games.  After Carl is attacked, Niklas runs to his aid and shoots the incoming walkers.  He has final words directed at him by Carl before the latter is shot out of mercy

Niklas first appears helping Gary load the vehicles, where he makes a snide comment.  He is present when Judy threatens Leo and is subsequently shot by Brooks.  After defying Gregory the right to take their things, he is taken away by the older man as a prisoner, under the care of Nils

Niklas is seen bound to a tent post with stains from dried foods all over his face.  He refuses to reveal any information and has his face cut from eye to jaw for defiance.  He is later seen when Izabel enters his tent to seduce him in order to torture him more, which he realizes too late when Gregory enters his tent.  Niklas then reveals how many people are in Apex if he gets his face stitched up.  He is given a melatonin pill to help him sleep through the night

Niklas awakes suddenly to find that Alex and Nils have torn off leg hairs in an attempt at a bet.  After he spits in the former's face, he is repeatedly slapped until his nose bleeds.

Niklas writhes in pain after being kicked in the balls by Brooks.  It is later revealed by Gregory that Niklas talked more about Apex than just the numbers.  When Leo, Dimitri, Phillip and Paul come to rescue him, Niklas apologizes to Leo for revealing how many they have and what they have.  After Stefan demands Niklas, he bites the former and watches Phillip punch and Paul kill the soldier.  He witnesses Gary being gunned down during their escape and arrives in the aftermath of the Massacre at the Target, where he stabs an undead Colin in the head.  He is then almost taken down by Tess and is last seen inside the Target looking down on Gavin Foxx's unconscious body

Niklas is seen with Leo, Taylor and Aaron outside the target. He mentions names of a few corpses and puts knives in their heads as well. He is later seen with Tess writing a list of names on a piece of paper. He walks up to Ruben and asks to stay behind with him for the night to watch for anymore people that might attack. He is present when Ruben shoots Liam and Callum in the head and makes Alex get on the ground. After he makes Alex read the list aloud and see his own name crosses off, Niklas shoots the survivor in the head, killing him

Niklas arrives early in the morning with Ruben and talks with Otis about Sean Moreland, who had recently found his way to Apex. Niklas slightly recognizes him, but instead runs off to find Tess. After explaining that he felt no different for killing Alex and for feeling tired and paranoid after the torture he endured, Tess suggests that the two sleep together for the rest of the day

Retrieved from "https://undeadfanstories.fandom.com/wiki/Niklas_(SGTA)?oldid=207522"
Community content is available under CC-BY-SA unless otherwise noted.