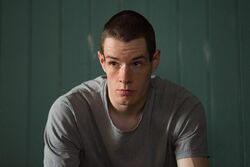 Nothing is known about Nick's life prior to the outbreak

At some point, Nick joined the Waterfront Community

Nick is first seen working under Leo Henderson at the Wiggins Outpost when a group arrives from Apex: Phillip James, Horatio Whittaker, Megan Shorris and Shania. He leads them to where Leo and others discuss reinforcement procedures on the outpost and joins Leo, Phillip and Horatio to Waterfront to meet with Chester Navarro and Arturo Vazquez. During their meeting, Nate Demarco and Stan inform the group of the attack on the outpost, and Nick joins them to head back

Nick arrives in the aftermath of the attack on the Wiggins Outpost. He later joins Phillip, Horatio, Dimitri Vanderbilt and Jackson Allen on a ride to Apex

Retrieved from "https://undeadfanstories.fandom.com/wiki/Nick_D%27Atomeo_(Scatter)?oldid=211062"
Community content is available under CC-BY-SA unless otherwise noted.