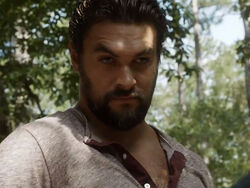 Nathan is a character in Say Goodbye to America: Scatter

Nothing is known about Nathan's life before the outbreak, except that he owned a record store with his brother

At some point, Nathan joined the Apex community

Nathan is first seen at Jenny's party talking with Todd and Tracy.  He tells Todd that he owned a record store with his brother called Rory and Nathan's Record Store.

Nathan is among one of the members of Leo's rescue crew.  Once they arrive at the Target, he is given the second shift of the night on guard duty

Nathan first appears inside the Target eating a banana.  He is recruited by Leo to rescue Niklas and is placed in a group with Gary to take the west flank.  He explains that he is not ready to kill if need be, but rather maim or injure.  He is present when Gary is shot to death during their escape and returns to see the aftermath of the Massacre at the Target

Retrieved from "https://undeadfanstories.fandom.com/wiki/Nathan_(SGTA)?oldid=207520"
Community content is available under CC-BY-SA unless otherwise noted.