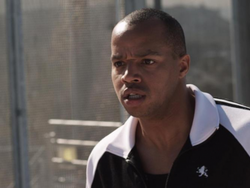 Richardson is a character in Say Goodbye to America: Scatter

Nothing is known about Richardson's life before the outbreak

At some point, Richardson joined Gregory's group, where he became a high ranking member

Richardson first appears after Brooks shoots Judy.  He is told by Gregory to take Liam and Rick Murphy into the Target to find if there's anyone else hiding. While not shown, he is attacked, bitten, and subsequently put down

Retrieved from "https://undeadfanstories.fandom.com/wiki/Nate_Richardson_(SGTA)?oldid=207316"
Community content is available under CC-BY-SA unless otherwise noted.