Start a Wiki
Milo is a character in Say Goodbye to America: Scatter
Milo 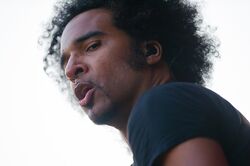 Nothing is known about Milo's life before the outbreak

At some point, Milo joined the Waterfront community as a commander of the Pungo River Outpost

Milo is first seen at the Pungo River Outpost when Chester Navarro arrives with a large group led by Leo Henderson asking to refuel before heading to Waterfront. He leaves Jared in charge and leaves for Waterfront. When they arrive at the Waterfront, he rides with Ciara Nash to the lot to park the cars

Retrieved from "https://undeadfanstories.fandom.com/wiki/Milo_(Scatter)?oldid=207741"
Community content is available under CC-BY-SA unless otherwise noted.