Start a Wiki
Miles is a character in Say Goodbye to America: Scatter
Miles 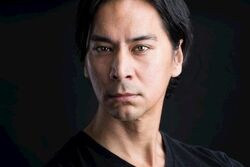 Nothing is known about Miles's life before the outbreak

At some point, Miles joined Gregory's group and became a member of the 'B' Squad

Miles arrives with the others outside the mall after riding with Julian, Kenneth, Spencer and Lulu. Once in the mall, he joins Izabel and Rick Murphy in the Abercrombie & Fitch. He joins the rest of the 'B; squad to investigate screams

Miles joins the rest of the 'B' Squad with Gregory to investigate screams from earlier. He witnesses Spencer shoot Timothy West in the gut, which leads to the latter's death. While the group runs away, they exchange gunfire with Nathan, Dimitri, Aaron and Garrett, which leads to Miles getting shot in the leg and left behind. While he drags himself along the floor, he struggles to keep away from walkers nearing him. After escaping the mall, he crawls even slower before passing out and dying from blood loss

Retrieved from "https://undeadfanstories.fandom.com/wiki/Miles_(SGTA)?oldid=208653"
Community content is available under CC-BY-SA unless otherwise noted.