Start a Wiki
Miguel Santos (Also known as Miguelito) is a character and a secondary antagonist in the second season of Say Goodbye to America: Scatter
Miguelito 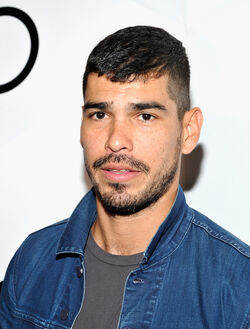 Nothing is known about Miguelito's life before the outbreak, except that he was imprisoned

At some point, he was freed by Gregory and moved to the prison community in the Yard

Miguelito is first seen with Virginia advising her to check on Stephanie Key. He is present the undead Stephanie attacks and is put down by Lewis

Migueltio is given orders by Gregory to grenade the community. He hits the schoolhouse and burns the building down, killing Chuck Conrad and Bradley. He is later seen by Sylvester and Devin Nelson and Scott Cleary being devoured by walkers

Retrieved from "https://undeadfanstories.fandom.com/wiki/Miguel_Santos_(Scatter)?oldid=208511"
Community content is available under CC-BY-SA unless otherwise noted.