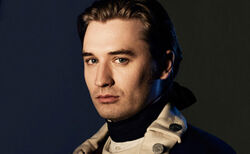 Michael is a character in Say Goodbye to America: Scatter

Nothing is known about Michael's life before the outbreak

Michael first appears during the Manhunt for Leo, during which he is told to stay put with Spencer.  After tossing him some gum, Spencer leaves Michael alone in the woods.  Throughout his guard duty, he sings Fly Like and Eagle by Steve Miller Band.  During his time on guard, he accidentally shoots and kills Patrick Henderson with several bullets out of fear.  Realising his mistake, he puts Patrick down and runs away.  While he is running, he comes across an undead Maxwell, where he is bitten and partially devoured until Spencer shows up to put Michael down

Retrieved from "https://undeadfanstories.fandom.com/wiki/Michael_(SGTA)?oldid=207322"
Community content is available under CC-BY-SA unless otherwise noted.