Start a Wiki
Megan is a character in Say Goodbye to America: Scatter
Megan 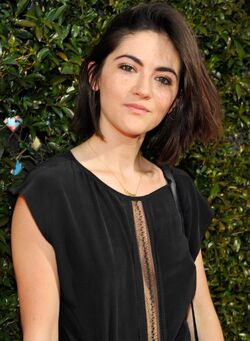 Nothing is known about Megan's life before the outbreak

At some point, Megan made her way to the O'Connor Compound, winding up as a prisoner. It is revealed she, along with several others, were initially part of the Soapstone Trail Military Base, and escaped.

Megan appears asking Eli what Apex is before they leave. During their escape, she and Jason Herr are shot by Julia Sabre. While the other escapees are fighting off the dead to make their way to Apex, she stays in the vehicle, as her breath had slowed

Megan appears in the flashback story told by Jason to the Apex survivors about their time at the Soapstone Trail Military Base. She first appears when Captain Lucas McDermott informs the survivors about the death of Major Stuart Montgomery. She is part of Jason's plan to escape from the base, and is set to gather food with Martita. While she, Martita and Quinn Kane grab food, they are stopped by PFC Gunderson, and in the ensuing struggle, Gunderson shoots Martita and Quinn kills Gunderson in response. She escapes with the others and is stopped at a border heading towards the O'Connor Compound

Megan appears with the other survivors, having found a place in Apex to sleep for the night

Megan is seen riding over to the Wiggins outpost with Phillip James, Horatio Whittaker and Shania. When the survivors from the O'Connor Compound use the dead to attack the outpost, Megan is cut along the stomach and tackled, but she is able to reveal the face of her attacker: Anna Cook, with whom she had escaped from Soapstone

Megan tries to get Anna to drop the knife and let her go, but Anna is unfazed. Megan is then stabbed repeatedly to death

Retrieved from "https://undeadfanstories.fandom.com/wiki/Megan_Shorris_(Scatter)?oldid=211230"
Community content is available under CC-BY-SA unless otherwise noted.