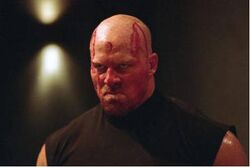 Maxwell is a character in Say Goodbye to America: Scatter

Nothing is known about Maxwell's life before the outbreak

Maxwell is first seen with Alex after Dex walks into the pair. He knocks out the smaller man with a bat.  He is later seen when Reid holds Jason hostage and Leo arrives to talk. After Alex leaves, Maxwell tells Reid to kill Jason.  Leo then shoots Reid in the head and Maxwell in the cheek.  As Maxwell pleads for his life, Leo shoots him above the femoral artery, where he bleeds out.  He is later found zombified by Michael who is subsequesntly partially devoured.  Both are later put down by Spencer.

Retrieved from "https://undeadfanstories.fandom.com/wiki/Maxwell_(Yard)_(Scatter)?oldid=209855"
Community content is available under CC-BY-SA unless otherwise noted.