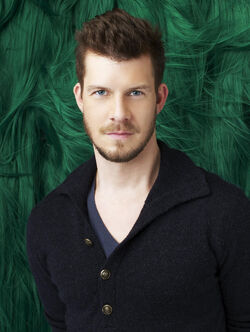 Nothing is known about Marlton's life before the outbreak

At some point, Marlton joined a camp with Todd Andrews

Marlton is first seen waiting for Todd and Luke O'Hara to bring supplies. He later sees a hidden bite on Harold Bach's arm and, fearing for his safety, kills him in the night. After much discussion going nowhere, Marlton keep watch at night and feeds a baby deer before being bitten on the face by a walker and pleading for death after revealing he killed Harold. After Tara Friedman denies him a quick death, he is killed by Rain Wong when she shoots him in the head

Marlton is seen in Todd's flashback keeping watch over the group while the others play cards. He holds both Tara and Harold at gunpoint when the pair enter the camp. He is the only one not trusting of them after they are allowed to be part of the group

Retrieved from "https://undeadfanstories.fandom.com/wiki/Marlton_McClain_(SGTA)?oldid=209301"
Community content is available under CC-BY-SA unless otherwise noted.