Start a Wiki
Margot is a character in Say Goodbye to America: Scatter
Margot 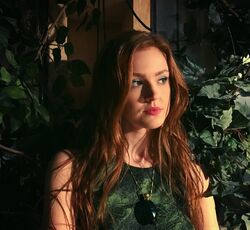 Nothing is known about Margot's life before the outbreak

At some point, Margot joined the Yard as a member of the 'B' squad

Margot arrives at the mall after riding with Gregory Ames, Rick Murphy, Lottie, Brooks and Cosmo Murphy. She enters the mall and heads into the jewelry store with Gregory, Kenneth and Nils when the four see Matt Graham and Bentley from Apex. She watches Gregory kill Bentley, but Kenneth fail to kill Matt. She leaves with Gregory and Nils to let Kenneth kill Matt. She later leaves with the other 'B' squad members after they hear Timothy West's screams.

While driving away from the mall, Spencer swerves a horde of zombies and overturns the car several times. Margot is badly injured and bleeding but decides to keep walking after being left behind. She eventually dies in the night and turns. She attacks Izabel, but is put down by Nils

Retrieved from "https://undeadfanstories.fandom.com/wiki/Margot_(Scatter)?oldid=207346"
Community content is available under CC-BY-SA unless otherwise noted.