Start a Wiki
Marcellus is a character and a secondary antagonist in the second season of Say Goodbye to America: Scatter
Marcellus 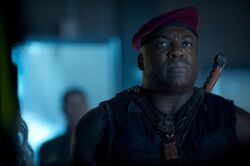 Nothing is known about Marcellus's life before the outbreak

At some point, Marcellus joined the Yard

Marcellus is first seen in Spencer's trailer with Brooks, Nils and Will Knight when Lewis walks in asking about Maine Ryan's supposed death. He later rides with Will, Nils and Izabel to Apex

Marcellus is present during the attack on Apex, during which he shoots and injures Train. He is later seen fleeing with Gregory, Brooks, Rick Murphy and Lottie

Marcellus is seen with Brooks, Lottie and Max in Brooks's trailer discussing a plot for a possible mutiny. He leaves when the other do not agree. He is later seen at Gregory's trailer and holds his leader at gunpoint. The two discuss Marcellus's reason behind treason and accepts Gregory's offer for cheese. After cocking the hammer on his gun to shoot Gregory, the two begin to fight. Marcellus is almost choked to death but stabs Gregory in the arm before fleeing. He does not get far before Gregory pounces on him, punches him, and chokes him to death. After killing him, Gregory uses Marcellus's gun and shoots Marcellus in the head

Retrieved from "https://undeadfanstories.fandom.com/wiki/Marcellus_(Scatter)?oldid=208508"
Community content is available under CC-BY-SA unless otherwise noted.