Start a Wiki
Maine Ryan is a character in Say Goodbye to America: Scatter
Maine Ryan 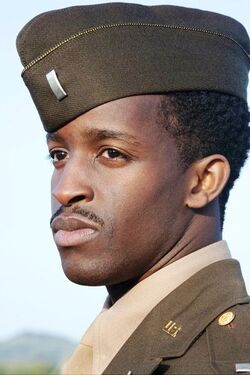 At some point, Maine served in the US Military, although the branch is unknown at this time

At some point, Maine joined the Yard

Maine sits in his area when Callum walks in and says he is going on a mission to the Target with Alex and Liam. Maine is afraid to call Callum anything other than best friend for fear of any repercussions but ultimately says he loves Callum anyway

Maine is seen with Lewis and Kevin comforting Stephanie Key. He accompanies Lewis to confront Johnny and Richard for assaulting Stephanie, which the pair ultimately confess to due to her sexuality. He later leaves with Max and Taz to find Callum, Alex and Liam at the Target, but only find their executed bodies behind. Maine returns and, fueled with rage over hearing Stephanie was also raped, brings Johnny and Richard in to the fighting ring. After witnessing Richard nearly decapitate Johnny, Maine shoots the former between the eyes and delivers a speech about his own bisexuality and how any attack based on sexuality will end in death before walking away

Maine sits in Gregory's trailer with Lewis after the latter tells Gregory that Maine killed Richard. He joins Brooks, Spencer, Nils and Rick Murphy on a mission to finally find Apex. As the group begins to head back to the Yard, Maine is shot in the gut by Brooks

Maine is seen passed out in Elizabeth's office

Maine finally wakes up and explains how he's no longer a part of the Yard since his attempted murder. He watches as Peanut takes Maine, Elizabeth and Eli Wilson hostage before fleeing with the latter.

Maine and Lewis have an argument while Maine sits on a bench in the cold. It gets to the point where Lewis almost calls Maine a faggot and Maine breaks off whatever friendship they had left, telling the former to leave him alone. He falls asleep on the bench that night

Maine is first seen on the bench dreaming about Callum. In his dreams, he is interrupted by an undead Annie McGovern, who infects Maine. Maine later dies on Otis's porch dreaming of Callum before infecting Otis and ultimately being put down

Retrieved from "https://undeadfanstories.fandom.com/wiki/Maine_Ryan_(SGTA)?oldid=208761"
Community content is available under CC-BY-SA unless otherwise noted.