Start a Wiki
Lysander is a character in Say Goodbye to America: Scatter
Lysander 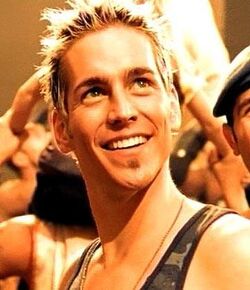 Nothing is known about Lysander's life before the outbreak

At some point, Lysander joined the Apex community as a guard

Lysander first appears on guard when Train takes his place. He comments on how quiet it has been

Lysander, as well as Phillip James and Miranda arrive at Jack West's house after hearing him punch the wall and yell

Lysander is present at the beginning of the attack on Apex. During the attack, he shoots and kills Spencer as the latter uses the machine gun on the truck

Lysander is seen on guard duty

Lysander is seen on his nightly jog when Rick Conrad walks by. The two talk for a while

Retrieved from "https://undeadfanstories.fandom.com/wiki/Lysander_(Scatter)?oldid=208807"
Community content is available under CC-BY-SA unless otherwise noted.