Start a Wiki
Logan Schiff is a character and unintentional antagonist in Say Goodbye to America: Scatter
Logan Schiff 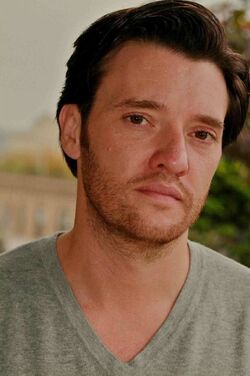 Nothing is known about Logan's life before the outbreak

At some point, Logan joined the Apex community and became a teacher alongside Kendall Standish

Logan is first seen in the schoolhouse teaching Piper Conrad, Chuck Conrad, Allison and Bradley and going over the homework. He asks where Devin Nelson is

Logan appears with Rick Conrad talking about Chuck. He asks Rick's permission to help teach Chuck to shoot a gun

Logan appears in the schoolhouse as it is burning down after being hit with grenades and fire bombs by Miguelito. Out of fear, he leaves Chuck and Bradley behind in the burning building

Logan is seen praying at the half-built church about his actions during the attack on Apex. He attacked by an angry Rick, who learns his son could have been saved by Logan. The two fight, but ultimately, Rick chokes Logan to death

Logan, now undead, walks upon Annie McGovern while she shoos away a cat outside her house. He bites her in the neck. As he devours her, she uses what strength she has left to pull a knife out and stab the undead Logan in the head

Retrieved from "https://undeadfanstories.fandom.com/wiki/Logan_Schiff_(Scatter)?oldid=208503"
Community content is available under CC-BY-SA unless otherwise noted.