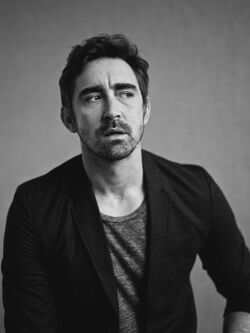 Lewis is a character in Say Goodbye to America: Scatter

Nothing is known about Lewis's life before the outbreak

Lewis first appears with Gregory's militia in an attempt to attack the Target.  He is seen during the Massacre at the Target.  After running out of bullets, he tries to use a throwing knife, but to no avail.  He watches as Georgia is shot in the head by Warren Smith.  He flees into the woods with the other survivors

Lewis arrives back with the others after the attack at the Target and brings Gregory a bottle of whiskey. He is present when Sean Moreland fights and kills Avi

With Gregory and most of the 'A' Squad being gone, Lewis is left in charge of the camp. He comforts Stephanie Key alongside Kevin and Maine after her assault by Johnny and Richard. He takes Maine to confront the two men, where he learns the two men assaulted her because she is a lesbian. He allows Maine to take Max and Taz to the target to find Alex, Liam and Callum, but the men return without the others. He learns Stephanie was raped and accompanies the other men take Johnny and Richard to the fighting circle, which he officiates. He watches Richard nearly decapitate Johnny and then as Maine shoots the former in the head. As he attempts to talk to Maine, he is told to save it

Lewis appears when Gregory and the mall group return. He informs him of Alex, Liam and Callum's deaths, as well as Maine's unsanctioned killing of Richard

Lewis is seen stepping out of Gregory's trailer and is met by Anthony. Fig soon runs up and tells him someone stole OTC medication. He is later seen in Gregory's trailer discussing Maine's unwarranted killing of Richard. As he leaves, he tried to apologize to Gregory, but is told to save it. He later appears when an undead Stephanie Key attacks a Yard Survivor, putting down both.

Lewis is seen in line to tell Gregory he will stay behind and keep charge of the Yard while he's gone. He finds Anthony has been bitten and knocks him out before zip-tying him to a chair to let him turn. He later goes to Spencer's trailer later to ask Brooks where Maine went, and he does not believe what he is told. Fed up with the conditions at the Yard, he shows Julian and Max Anthony's reanimated corpse and reveals his plans to leave and release Anthony on the Yard to thin out Gregory's numbers and join the Apex community. Julian decides to join him but Max wants to stay behind for the time being

Lewis, along with Julian, release Anthony into the Yard as they leave. This causes mass chaos and an invasion in the Yard

Lewis is seen with Julian walking and discussing their trip. He is flooded with thoughts of the Yard and letting Anthony stay undead. He is later seen saving Julian's life from a group of walkers. They are later seen settling down for the night

"Arriving Somewhere But Not Here" Edit

Lewis and Julian are led into Apex by Octavio Arévalo and Evan Curtis to meet Jenny Hanson. They explain they left the Yard after unleashing the dead due to Maine Ryan's apparent murder. He is later shocked to see Nils and Izabel at Apex. He watches Niklas stab the former in the gut and helps carry him into Elizabeth Hill's office. He is shocked to see Maine and Will Knight sitting in the office

Lewis is still in the infirmary with Todd, Elizabeth, Otis and Eli Wilson helping Nils. He later learns from Ruben Eastview of Niklas's list and that Ruben killed Callum and Liam.

Lewis is first seen asking Will where Maine went. When he sees Maine again, the latter aggressively tells him to leave him alone forever

Lewis appears with Matt Graham chasing after Todd Andrews. He later looks upon Maine's corpse with Ruben and Sean and notices the former was bitten. He does not look to have any remorse on his face

Retrieved from "https://undeadfanstories.fandom.com/wiki/Lewis_Edwards_(Scatter)?oldid=208810"
Community content is available under CC-BY-SA unless otherwise noted.