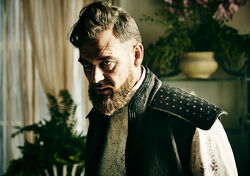 Leo is a character in Say Goodbye to America: Scatter

Nothing is known about Leo's life before the outbreak, except that he was in the circus, which leads to him being good at knife throwing

At some point, Leo joined the Apex community, where he became the leader of the scavengers

Leo is seen with his group around 100 miles away from Apex trying to scavenge supplies.  He and the rest of the group arrive at the Target out of town and begin to scavenge for supplies.  He heads for the shoe department.  He is the first to run to Carl's aid when the latter is bitten and listens to his final goodbyes.  Otis does not allow Leo to put Carl down.

Leo and Gary begin to load up the cars.  Leo calls out to the group to move faster so they can get back home.  He is present when Judy begins to get drunk and is later threatened at bottle point by her.  He is present when she is shot in the chest by Brooks and is held captive by Gregory's group.  After they leave, Leo tells Judy he will help her and shoots her out of mercy off screen.  Leo and Meredith later arrive back at Apex and discuss what they should tell Jenny.  They wait at the gate for a few minutes for Annie to open it.  He walks up to Jenny's door and tells her she and he need to talk to Rick and his kids

Leo and Jenny walk up to Rick Conrad's house and tell him that Judy was shot and killed by a group of assailants.  As they leave, she tells him to rescue Niklas as soon as possible, and if they can't, they need to make Phillip shoot the boy.  Leo then holds a meeting for all the members of the rescue crew and is surprised to see Scott instead of Garrett.  He tells the group the plan and they leave

Leo, Dexter and Jason leave the next morning and split, with Leo going to the left.  After Jason radios to him, Leo heads through the woods to find Jason held at knifepoint and Dex unconscious.  He is spoken to by Alex about giving half their supplies in exchange for protection, but Leo offers up an idea about communal sharing, which Alex seems to like.  After Alex leaves, Reid tells Leo that the plan won't workk as the former slits Jason's throat.  Leo then shoots Reid in between the eyes and Maxwell in the cheek and then above the femoral artery, before picking up Dex and fleeing.  Leo is pursued by Elena, Patrick and Bryce, but kills Bryce with a knife and Elena with a bullet to the head.  Leo returns to the Target at night and tells Dimitri and Otis about Jason's death.  He is present when Warren Smith, Paul and Tim show up at the Target

Leo first appears when Dex wakes up after being hit by Maxwell. Having no recollection of the day before, Leo tells Dex that Jason was killed and Dex was dragged back unconscious. He exits the Target and walks up to Scott Cleary, Phillip and Dimitri, and tells the latter two to get ready to leave and grab Niklas. His group takes an eastward flank. He tries to count down the explosion placed by Meredith, Tess and Aaron, but misses it. He runs into the camp and is about to shoot the guard watching Niklas before he is struck in awe as Gary Taylor is able to lead the guard away. He is present when Stefan arrives and questions the men on why Niklas is being taken out, before incorrectly answering. He watches as Phillip punches Stefan and Paul kills him and is present when Gary is shot in his tracks trying to escape. He arrives back at the Target just after the Massacre and questions why Gavin Foxx is being treated by Taylor. He understands Warren's decision but believes it will only work if Gavin wakes up the next day

Leo, along with Niklas, Taylor and Aaron, clear the area around the Target of any dead. He is present when Gavin Foxx wakes up and tells him he is only alive so that Gregory doesn't have another person and so that there won't be another death. He later leaves in Dimitri's car after letting Niklas and Ruben stay behind. He is present when Gavin Foxx is taken out at Apex

Leo is seen walking up to Nathan and Aaron asking about how the mission went.

Leo is seen in Jenny's house with Eddie Hedd, Otis and Aaron being told to find Garrett and Fish. He leaves at the behest of Eddie.

Leo returns with Eddie and Aaron without Garrett or Fish while Gregory and the Yard attack Apex. He tells Gregory to stand down; that they've lost too many already. He watches Meredith get killed and shoots Gregory back in anger. He and Phillip carry a wounded Will Knight into Elizabeth Hill's office.

Leo is among the group who need to find more supplies for rebuilding Apex. He attends Jenny's meeting beforehand.

Leo rides with Phillip and tells his passenger of his life before the outbreak. He had a wife who died of cancer, and a son named Jax who is in Florida. He runs into a large horde with the others and watches as Doug Santos sacrifices himself so the others can leave. When they arrive at the Train Station, he is the first to call out Ciara Nash and tell her to reveal herself and others in her group

Retrieved from "https://undeadfanstories.fandom.com/wiki/Leo_Henderson_(SGTA)?oldid=209566"
Community content is available under CC-BY-SA unless otherwise noted.