Start a Wiki
Kayleigh is a character in Say Goodbye to America: Scatter
Kayleigh 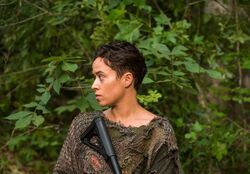 Nothing is known about Kayleigh's life before the outbreak

Kayleigh is first seen with Richard Harris when Barney Munson arrives with a large group from Apex. She introduces herself and helps the doctor with David Blair

Retrieved from "https://undeadfanstories.fandom.com/wiki/Kayleigh_(Scatter)?oldid=207744"
Community content is available under CC-BY-SA unless otherwise noted.