Start a Wiki
Karim Fadil is a character in Say Goodbye to America: Scatter
Karim Fadil 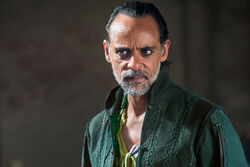 Nothing is known about Karim's life before the outbreak

At some point, Karim joined the O'Connor Compound

Karim appears giving food to Eli, Basil, Kevin, Cole and the other prisoners. When Eli begins telling the other prisoners about how they are being served human meat, Karim aims to kill him, but Peanut intervenes, breaks Karim's finger, and knocks him out

Karim appears keeping watch over Asher Praedo, who is tied up for interrogation. He proceeds to hold Asher's head when Ned wants to pull an eyelid out but is unable to. Karim is then let free to torture Asher further

After Asher finally speaks, Ned has Karim take care of him and bring him dinner. During dinner, Karim insults Asher, which causes him to throw his burning hot chicken pot pie into Karim's face. The two fight and Karim is able to choke Asher but is beaten down and killed with a table leg

Retrieved from "https://undeadfanstories.fandom.com/wiki/Karim_Fadil_(Scatter)?oldid=211201"
Community content is available under CC-BY-SA unless otherwise noted.