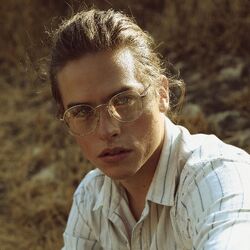 Nothing is known about Jarrod's life prior to the outbreak, except that he was a college student

At some point, Jarrod made a home in his university's med school, which he dubbed Cydonia

Jarrod is first seen when Eli Wilson, Quinn Kane and Ryo Osaka find him hidden away while searching the med school for supplies. Jarrod tells them what they want to know before taking them to his room, where his girlfriend Elle waits for him, and then to Becky's so they can get supplies. He later takes Eli to investigate a gunshot, where they find Fish West and Sylvester Nelson in a standoff with Roger Fester, J.D. Eisbach and Andrew Marino. He tries to keep the peace between the groups once the soldiers, led by Sergeant Gutierrez, arrive with their guns raised.

Jarrod first appears with Eli and J.D. packing up their things before leaving for Apex. Along the way, Becky's car breaks down and the horn starts blaring, causing biters to swarm around them. Jarrod is able to convince Artie, who had never killed biters before then, to finally start doing so to help everyone. After the biters are dead, Jarrod shares a heartfelt goodbye with an infected Artie before walking into the woods and putting him down

Jarrod will appear in this episode

Retrieved from "https://undeadfanstories.fandom.com/wiki/Jarrod_Davis_(Scatter)?oldid=211162"
Community content is available under CC-BY-SA unless otherwise noted.