Start a Wiki
Jared is a character in Say Goodbye to America: Scatter
Jared 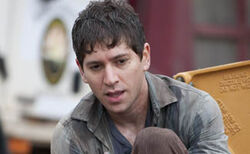 Nothing is known about Jared's life before the outbreak

At some point, Jared joined the Waterfront community, where he works as second in command at the Pungo River Outpost

Jared is first seen with Milo when Chester Navarro arrives asking to refuel on his trip back to Waterfront. Milo leaves him in charge of the outpost

Jared is seen in Milo's offices when the latter gets word via telegraph not to trust anyone. Jared then pulls out a knife and attacks Milo. The two struggle for a while until Milo stabs and kills Jared, revealing that Ryan (A.K.A Judas) had gotten to him and convinced him to rebel in the Pungo River Outpost. Milo then stabs Jared in the head with the latter's knife

Retrieved from "https://undeadfanstories.fandom.com/wiki/Jared_(Scatter)?oldid=209229"
Community content is available under CC-BY-SA unless otherwise noted.