Start a Wiki
The Jane is a character in Say Goodbye to America: Scatter
Jane Byron 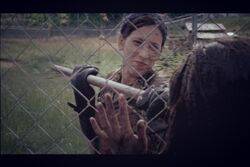 Nothing is known about Jane's life before the outbreak

At some point, the survivor joined the Yard

The survivor is first seen with Max and James Walsh when an undead Anthony attacks the Yard. She brings Max inside and asks how it got that bad

Jane is inside the building with the other survivors when she notices James's bite and informs Max. She helps the kid for a little while.

Jane appears upset of Gregory's use of the word 'cunt', but is told by Brooks that no one cares what she thinks. She later appears checking up on Fig, but informs him that he will eventually die from the bullet lodged in him since there is no exit wound and she cannot take it out

Jane questions Rick Murphy about Gregory, then listens to his speech

Jane is seen during the vote in the Yard. She, along with Max, Adam McGill and Ryo Osaka vote to leave the Yard, but ultimately stay anyway

Jane is seen talking with Ryo

Jane is seen at the fire pit feast and listens to Brooks's story, offering her love and support, although he rebuffs her compassion. When the biters attack, she is seen briefly holding her own but later shown to already be dead and being devoured. She is put down by Ryo before she can turn

Retrieved from "https://undeadfanstories.fandom.com/wiki/Jane_Byron_(Scatter)?oldid=209359"
Community content is available under CC-BY-SA unless otherwise noted.